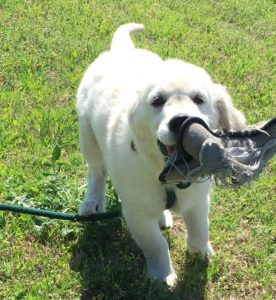 All of our Golden Retriever puppies are born in the main part of the house and raised in the kitchen/ main living areas. By two weeks, their eyes are open. As early as four weeks of age, we already begin to see personalities and each puppy’s emerging temperament. Once they are between four and five weeks old, the puppies are allowed to play and explore in the backyard for short periods of time. To test their temperaments, we use an experienced dog trainer and implement the world-renowned Volhard Temperament Test at seven weeks. This is the same test used for potential guide dogs, military dogs, police dogs, drug dogs, sports dogs, and other service dogs. The scores from the Volhard Temperament Test coupled with our own interactions with the puppies allow us to intelligently match owners with their new companions.

Following traditional Early Neurological Stimulation protocol, we handle our puppies every day once they are born. Further supporting this protocol, research has proven a direct correlation to increased physical and emotional strength and the amount of information the puppy’s brain absorbs between their birth and sixteen weeks of age. To help promote this, we allow our puppies to experience a variety of textures and temperatures (all within healthy moderation) before their eyes are even open. We also conduct stress tests as the puppies grow, a practice supported by many scientists’ belief that “stressing” puppies early in life prevents disease as they age. 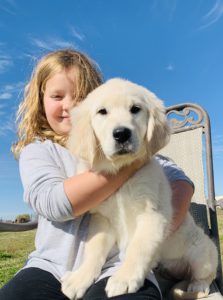 At three weeks of age, we continue to handle our puppies daily, but they are also increasingly handled by a mixture of men, women, and children (all safely and under supervision, of course). The puppies are also taught to come when called at three weeks. We begin by saying “come” each time they are fed, and reinforce the command any time the Golden Retriever puppies are running toward us or when we are playing outside. We also begin to introduce them to new sounds at different levels of volume and pitch. The puppies are exposed to different types and styles of music, dominant and comforting tones of voice, alarms, and even the banging of pots and pans.

Once the Golden Retriever puppies reach six weeks of age, we begin taking them into our large fenced yard for nature walks with their mom and brothers and sisters. While safely inside the fence, they are able to run, jump, and play outside as they see new and foreign animals such as horses, donkeys, goats, cats, and birds. In doing this, we are teaching the puppies to become more comfortable with their big, new world while also developing more complex motor skills and instilling them with the idea that following humans is a desired behavior.

We believe in extensive socialization and training at an early age. And while our Golden Retriever puppies are introduced to dogs of various ages and sizes, we are extremely cautious and intentional to ensure exposures to all animals and environments are safe and free from disease. Climbing stairs, using a doggy door, learning to come when called, eliminating in a litter box, playing ball, and responding to “no bite” are all things we begin to train at six weeks of age. Exposing our puppies to socialization and training early on helps them to learn and to become well adjusted, which ultimately makes life easier and happier for you and your new pup!